In June of 1986, Shihan Ken Walsh began training in the martial arts style of Shudokan Karate under the instruction of Shihan Javier Diaz (Founder of Club de Karate-Do “NAHA”) He trained almost everyday with Shihan Javier for about six months, unfortunately in December of the same year, Shihan Javier Diaz had to move back to Mexico, leaving Shihan Ken without a karate instructor.

In February of 1987, Shihan Ken was invited to begin training in the style of Wonhwa-Do (Now known as Tong Il Moo Do) under the tutelage of Kensaku Takahashi. Two years later Shihan Ken earned his black belt in the style of Wonhwa Do. During this time he also studied with many other great martial arts instructors such as, Kyoshi Tommy May of Isshin Ryu, Sifu Bonny Lim of Ngo Chu, Ken Parker of Judo, Dennis Campo of Tae Kwon Do, and the late Professor Vee of Vee Arnis Jujitsu.  Soon after Shihan Ken develops Hensan Ryu and establishes a dojo at a Boys and Girls Club in New Rochelle, New York. Shihan Ken names the dojo Club Naha in honor of his first instructor Shihan Javier Diaz

In 1999 Shihan Javier Diaz moved to Maine and began teaching the style of Shudokan Karate to the students of Club Naha, however in 2002 he again had to return to Mexico. During this time however the style of Hensan Ryu, which had a major Wonhwa Do influence began to look more and more like Shudokan Karate. In 2006 Shihan Ken promoted Renshi Craig to Head Instructor of Hensan Ryu

﻿In 2011 and 2012, Shihan Javier came to visit Maine to teach Shudokan. More Shudokan Karate was then added to Hensan Ryu.  Eventually the style which was primarily Wonhwa Do was now mostly Shudokan.  Due to this change of influence the style was renamed Kai Naha Karate-Do (Club “NAHA” Karate-Do) in honor of Shihan Javier Diaz and the Club De Karate-Do “NAHA” Dojo.

From 2013 on, Renshi Craig continued learning more and more about Shudokan and in December of 2020, Renshi Craig traveled to Iguala, Mexico to train at the Club "NAHA" Karate-Do headquarters dojo.  There he received his sixth degree black belt in Shudokan Karate under Shihan Javier Diaz. 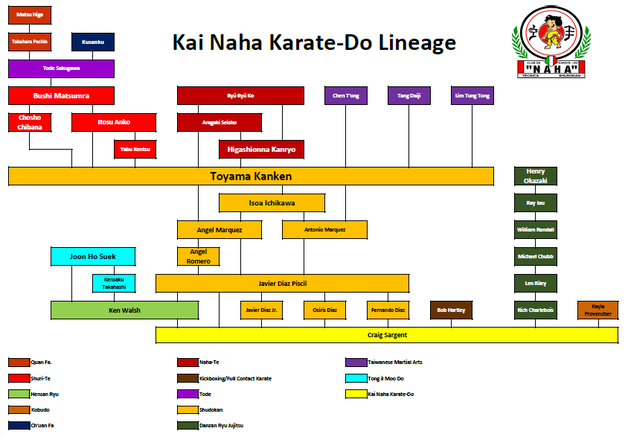